It’s been so long since I posted something and it’s not because I m going through some kind of writers block or a busy life but it’s just because of my laziness. Anyways, I have decided to stop being lazy and get back to posting. And when I was thinking about what to post I had an idea of making another list (yes, yet another list). This time I have decided to make a list of My Favorite Movies… in other words Top 100 Movies according to me. And here are my 100 – 91 movies. 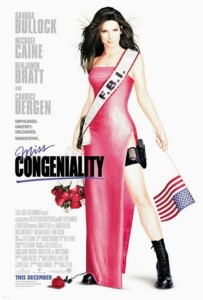 Sandra Bullock as a tom boy FBI is great and funny. The movie is a light- hearted, funny and there is that added suspense. Its chick lit but well I am a chick, so I like it. I have to say that Miss. Congeniality 2 was no where as good as one. I was disappointed with that movie. I thought many many many times before putting this movie here. There are many things not so great about this movie but movie has Matthew McConaughey and Jennifer Lopez in it. The chemistry between the two is something to see and the movie makes you smile. I liked it the 1st time I saw it… the feeling remained the same the next two times I saw it. So, I guess its one of my favorites. Lindsay Lohan in this movie is so sweet, cute and adorable. The whole movie is a perfect blend for a good movie. This was one of my favorite movies when I was a kid. I liked the Butler especially. There is a Telugu version of this movie too but I prefer the Hollywood version. I know that’s its neither one of the best dog movies ever nor does it do justice to the book but I like it. The movie is sweet, funny, cute, real, and simple and you can’t help but fall in love with the Marley. Marley’s antics and the final scene of the movie make the movie what it is. This is one of my favorite Horror movies. I am really not all that scared when it comes to watching a horror movie until its absolutely brilliant, indulging and gripping. I was watching this movie alone sleeping on the couch and it for sure gave me chills. Unlike many horror the movies, the horror in this movie comes from the build up in the story. Naomi Watts acting in the movie was amazing. I guess this is one of those less known movies. The movie stars Chris Evans and Kim Basinger and is a terrific thriller. The whole concept of the movie is brilliant, its fast paced, well acted with an amazing story line which I think is very unique. If you are a fan of thrillers and haven’t seen this movie yet then do watch it. I love animation movies. My friends call me weird and kiddo for this reason but I don’t really care. To make a good animation movie you need to talented and have a lot of skill and The Princess and the Frog has that. It’s a movie that’s fun, romantic, emotional with a good story. I am not a kid but I do like this movie. One of the many Tom Hanks movies I m a fan of. I love Tom Hanks… he is a brilliant actor. Anyways, the movie not just belongs to Tom Hanks but big drolly dog… Hooch. The chemistry between Hanks and French Mastiff (Dog) is best part of the movie. It’s a must watch for Tom Hanks and dogs lovers for sure.

Done for now but will post more soon. To be frank I am loving this whole thing. It combines two things I love – Movies and making lists :). So keep an eye this space for more :P.

PS  – I am back to the old template because the new one was slowing the blog down :(.

Getting Musical Inside Out

I m lucky to be your ‘Little Girl’