Few Days ago CB hosted a contest called ‘Finish It To Win It’. In this contest CB wrote the 1st half of the story and asked her readers to complete the rest. To be fair to all the readers the entries were anonymous and were judged with no bias… which according me to the best part of the whole contest. I also participated and here is my entry.

Will and Rose weren’t the perfect couple, but the honesty they’d invested in their marriage made it so special. Like all of us, they shared their bit of differences and similarities. They had their pasts before life brought them together and now it felt as if they had taken their own paths one more time. Being married for five years and blessed with a beautiful daughter, Betty; their life held a ‘magical’ feel for anyone observing them.

Will held a powerful position in his field; Rose was a beauty with brains and the skills to cure any ailment. Will worked for an advertising company and Rose was a doctor. Everything had been running smooth, just when life took a U-turn. At first, Rose shook off her doubts blaming it on their ever-busy work schedules and stress. But soon Will’s absence from the dinner table became a regular affair. It would be days before Betty would get to spend time with Will for he’d wake up after she’d left for the day care and when he got back home she would be sound asleep, lost in the dreams of the fairy tales her mum would spin for her.

Rose decided to talk to him about it . Tonight she was determined to seek a definite answer as to what seemed to be an ever-lingering issue. Whenever she’d try to bring up the topic, Will would lovingly brush it off as work-stress. She too had her busy moments, racing for emergencies, but this was nowhere similar. Will was always lost in deep thought and nothing seemed to hold his attention for longer than a few seconds. As worry slowly tiptoed in Rose’s life, it brought along panic and doubt. Nothing rusts a relation faster than doubt.

It was a Saturday. Rose had been busy playing with her daughter and they were both having a wonderful time running around the flower beds in the garden. Just then the phone rang. It was the ringtone of Will’s phone. Just as Rose turned towards the lounge to answer the call, she heard Betty’s cry. Betty had fallen over a pot of roses and scratched herself. Rose rushed towards Betty and the phone call was all forgotten. At first Rose thought Will was back, but she soon realized he’d forgotten his mobile. Later, when the situation was under control and Betty had gone off to sleep, Rose reached the phone to check for any messages from the phone call. It was from an unknown number. The call was for Will and it was a short 5 second message in a female voice. She couldn’t understand anything except, “Hello……Mary……..!”

That one word was enough to send her calm system into a turmoil. She’d known Mary very well from the way Will had described her. Though she’d never met her, but still Rose had a fair bit of an idea of what she looked like, all she loved and everything she wore, including her fragrances. Will and Mary had been together before Rose stepped in his life. Though Will had promised her that every bit of his life with Mary was long forgotten, Rose had seen the traces of his first love strewn all over the place when she’d first visited Will’s home. It had taken a long courtship and many promises on part of Will to reassure Rose that she was his present and his future. Life had moved on smoothly till today. As tears welled up in her eyes, a tiny little thought of positivity sprang in her mind, “why can’t this Mary be someone else? She shouldn’t be doubting her husband like that”. She decided to confirm her doubts and started searching Will’s mobile for further clues.

The phone book had no entries by her (Mary’s) name, but what if he’d saved her as someone else? She scrolled through his message bank, but nothing made any sense till she landed on a message sent almost three months ago.

‘Meet me at 6. We can come up with a plan and I promise your wife will know nothing about this’.

As Rose read those words she froze with shock. Her hands started to tremble as her mind clouded with thoughts and eyes with tears. So, Will had been cheating on her. All those days when he said he was working late, he had been doing God knows what with Mary. But a little part of still failed to believe the evidence in front of her, “Will would never do this to me… he loves me”, it kept saying. The only way she could see if that little voice inside her head was by confronting him tonight.

As Will entered the home, he failed to notice his wife sitting on the table with tears in her eyes and tapping her feet with impatience.

“Hi Dear”, he wished like he usually did. When he got no reply from his loving wife who would normally run to him and throw her arms around him and kiss him, he looked at her direction.

“Mary called”, she said looking up to meet his eyes. The expression on his face did nothing to pacify her feelings of anger and hurt.

“Oh! I will call her as soon as I freshen up”, he said taking his phone from the counter and walking towards the bedroom.

This made Will take a clear look of his wife. In all the 5 years she had never shouted at him.

“What’s wrong honey”? He asked concerned and walked towards her.

“Don’t”, Rose yelled as Will was about to touch her.

“Don’t touch me”, she said fighting back a lump in her throat.

Will immediately withdrew his hands.

“Why is Mary calling you? Why are you meeting her behind my back? What the hell is going on Will?”

“Don’t lie to me Will. I just read the message…” was all she could manage before she broke down.

“Honey!” Will said wiping her tears away. He wanted to yell at her for not trusting him, for reading his messages but looking at Rose cry he couldn’t bring himself to do that.

“Mary is Mary Anderson. She is a travel agent”, he said finally lifting his wife’s face to meet her eyes.

“I was planning on surprising you for our 6th wedding anniversary. I met her couple of times and made arrangements for 5 day trip. I also spoke to my sister who has agreed to take care of Betty while we are away”, he said kissing her eyes as she closed them ashamed to look at his face.

“Sorry”, she said bending her head down and cursing herself as guilt flushed through her body.

“I am so sorry Will. I ruined everything. I should have never doubted you. It’s just that I saw Mary there and…. Sorry”.

“Shh… I will never understand why do you feel so insecured when it comes to Mary? Why do you become all hysterical when ever you hear the name Mary? There are other Mary’s in world, you know”, he said smiling.

“Sor…” was all Rose said before Will placed his finger on her lips.

“You are everything I ever wanted Rose. And besides you haven’t ruined everything, the place is still a secret”, he said finding her lips.

I never knew that writing a story with the title “A Pleasant Surprise” would actually end up being a pleasant surprise for me. I won the second prize in the competition and I m elated.  I dint expect it because there were other 18 stories that were brilliant. Anyways, I won, so I m gonna celebrate :P. Here are my awards – 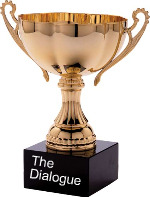 I would like to thank CB for everything. She put in so much of an effort to host this competition and make it a huge success. There were 19 entries for crying out loud. I hope in future too she conducts many more contests like these.

I watch way too much Television 2

Getting Musical Inside Out